You are here: Home / News / All news / Swedish support in Albania. Ahmetaj – Jämtin, “From April ... 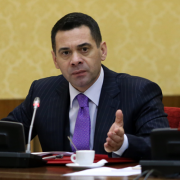 Minister of Finance and Economy, Arben Ahmetaj, hosted today in a meeting the Executive Director of the Swedish Agency for International Cooperation (SIDA), Ms. Carin Jämtin, along with the delegation accompanying him.

During the meeting, the parties discussed the current cooperation between the Albanian government and SIDA, with emphasis on some of the main projects funded by SIDA in Albania.

Minister Ahmetaj expressed his gratitude for the constant support that Sweden has given to Albania in the political and economic and social development of our country. Between the two countries there is much untapped potential and, in this regard, Minister Ahmetaj invited Swedish entrepreneurs and investors to come to Albania.

For her part, the Managing Director of SIDA expressed the support of Sweden for the integration of Albania into the European Union, which, according to her, is also the main purpose of the work of the SIDA Office in Tirana. In this context, she stressed the special importance of judicial reform.

Statement by Minister Ahmetaj after the meeting:

Today I had the pleasure to welcome Ms. Carin Jämtin, General Director of the Swedish Agency for International Development (SIDA) and the delegation accompanying her on her visit to Tirana.
Take the opportunity to publicly express the Albanian government’s gratitude for Sweden’s support, both in terms of politics and the country’s economic and social development. Here, I would particularly like to highlight the aid for territorial administrative reform and the project “Establishment of a Property Valuation System on the Market Value Basis”, or as we refer to otherwise “Fiscal Cadastre”, for which several days ago we signed another cooperation agreement with the representative of SIDA, Lars Leijkvist.

The main instrument for concretization of Swedish development aid in our country is the activity of the Swedish Agency for Development and Cooperation (SIDA), which is based on the strategy adopted for the period 2014-2020. This strategy envisages annual funding of around 80 million kronor, or about 9 million euros.

Of course, Sweden provides technical assistance and a range of other training programs, which are an extraordinary aid to the successful implementation of reforms and related projects.
In terms of trade exchanges, figures are still modest but growing.

In 2017, trade between countries reached euro 31.7 million, an increase of 56% compared to 2016. Exports to Sweden were about 19m euros and imports from Sweden about 13m euros.
Mainly imported goods from Sweden are means of transport, tools, wood or medicaments.

In Albania, currently referring to March 2018, a number of 20 Swedish active enterprises in the wholesale and retail trade, processing industry and services, agriculture and fishing forests, however, the invested capital is still low.

There is definitely a lot of untapped potential between the two countries. One of the important changes that is worth mentioning is the increase, nearly doubling year after year, of the number of Swedish tourists in Albania. It has increased from 10 thousand to 25 thousand the number of Swedish citizens coming through agencies. So, as you can see, the attractiveness of the northern European countries, in the Swedish case, for Albanian tourism is shown in ever-increasing numbers.

As I said, there is definitely a lot of untapped potential between the two countries. This is a very good moment for the Albanian economy, with a number of initiatives that have been undertaken or currently are undertaken, such as deregulation reform to ease the business climate, or fiscal incentives in important sectors such as tourism and information technology industries. There are opportunities to be used by Swedish entrepreneurs and investors, so I benefit from this communication to repeat my invitation again.

On the other hand, this is a very important time in the political aspect, where we are waiting very soon for the opening of negotiations with the European Union and appreciating the support of Sweden in all the steps of the integration process of Albania into the EU, we are convinced that we will continue to have it in the framework of negotiations for opening negotiations. It is a challenge Albania is already prepared to face.

And to close, as I have said, the most current and direct project related to the Ministry of Finance and Economy is that of the fiscal cadastre. We have made a very good progress in establishing and preparing the system, with the help of the Swedish experts and as you know, from April 1st we will be ready to implement the new methodology for calculating the value of property tax on the basis of the market value.

Swedish experts have a profound experience in the region with the fiscal cadastre. They have helped Kosovo to raise and turn it into a success. I am convinced that the joint work will also be successful in Albania.

Thank you for visiting.

Minister Ahmetaj is appointed Deputy Chairman of the EBRD Governing Board

Albania-Croatia Economic Cooperation, the 5th Session of the Joint Commission...
Scroll to top