You are here: Home / News / All news / Albania-Croatia Economic Cooperation, the 5th Session of the Joint Commission... 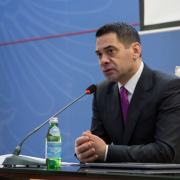 Albania-Croatia Joint Economic Cooperation Committee held its 5th Session on 15 May 2018 in Zagreb, Croatia, under the chairmanship of the Deputy Minister of Finance and Economy of Albania, Ms. Albana Shkurta and Assistant Minister of Economy, Entrepreneurship and Crafts of Croatia, Mr. Zvonimir Novak.

During the sessions, the Albanian and Croatian side exchanged information on the prospects of bilateral economic cooperation, and in particular the talks focused on the fields of industry, transport and infrastructure, energy and environmental protection, tourism, agriculture, finance, urban development and spatial planning, science, health, social protection, standardization and EU integration.

Present at the meeting was the Albanian Ambassador to Croatia, Mr. Ilir Melo