You are here: Home / News / All news / Minister Ahmetaj is appointed Deputy Chairman of the EBRD Governing Bo... 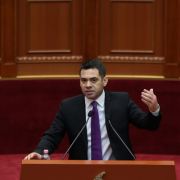 Minister of Finance and Economy, Arben Ahmetaj attended today at the Annual Meeting of the European Bank for Reconstruction and Development (EBRD), which is taking place in Jordan. The focus of this meeting is the Bank’s investments in the countries it operates, as well as the prospect of expansion in the Sub-Saharan Africa region.

Ahmetaj stressed that “the Albanian economy is in the fourth year of accelerating growth to 3.8%” and that “fiscal consolidation efforts and economic growth have been determining factors for job creation and reduction of inequality”, while youth unemployment in the Albanian economy is the lowest in the region.

The Finance and Economy Minister voiced the government’s assessment of the role the European Bank for Reconstruction and Development has in a number of important projects in our country, such as infrastructure, energy, business climate and agriculture financing.

In this context, Minister Ahmetaj said that investments with EBRD’s support, like Fier and Vlora Bypass and Tirana-Durres railway, are extremely important investments to improve infrastructure in the country.

During the Annual Meeting proceedings, Minister Ahmetaj supported the proposal of the Board of Governors of the EBRD to explore expansion opportunities in new countries in Sub-Saharan Africa region.